I think ‘searching’ is one instinct which we have very well inherited from ancestors. Previously we searched for food and shelter and now we search for our mobiles. Yes, seriously if I am at home that is one thing which definitely happens. But even without these smartphones, our ancestors excelled. Whether it is Kailasa Temple or Chand Baori or Dholavira or many other ancient wonders, anachronistic wit is unmatched. And it is because of this acumen that people have survived even in the most challenging places to live in, The great Indian desert, Thar. Amazingly, 60% of Thar falls in Rajasthan making it a world of contrast where the tapestry of the landscape is not only outlined by the nomad sand dunes but also by the age-old traditions and man-made marvels. These shimmering sands and contoured desolation attract many travellers but miraculously we are not the only one who is welcomed here! Let’s explore the land of wonders, Rajasthan. 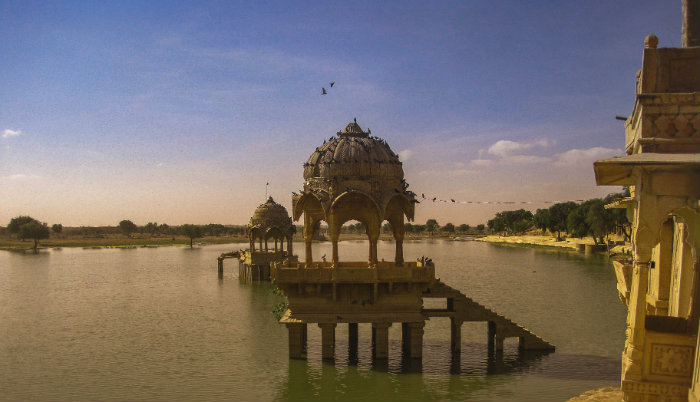 Amid the narrow streets, huddling blue houses and grand havelis on the slopes that are topped by one of the largest forts of India, Mehrangarh Fort, you can catch the essence of ethnicity which Jodhpur holds. While this blue city is the favourite shopping stop for the ones who seek Rajasthani vendibles, it is like nirvana for music lovers. Remember, I told you about Jodhpur RIFF in the unconventional festivals of India? Just got goosebumps thinking how enchanting experience it was! Apart from this grand festival would you believe that Mehrangarh fort also hosts the Black Kites? I know that sounds daunting but spotting hundreds of Kites is certainly a sight to behold. Trust me! But there is surely an unnerving story about this fort which will shake your soul.

It was in 1730 AD when for building one of the palaces in Mehrangarh Fort, Maharaja Abhai Singh, the ruler of Marwar commanded to cut Khejri trees from Khejarli village. The Bishnoi tribe living in the village consider every living thing sacred and Khejri tree has utmost importance in their culture. Thus, for saving the trees, people started hugging them but efforts went in vain. Yes, your speculations are right, the trees were cut and so were the people. 363 people were killed to cut the trees. Later, when the King was informed about the revolution, the tree-felling party was withdrawn. What a heart-breaking massacre it was! But let’s not leave Jodhpur in agony of this story. Travel 25 kilometres to reach Aarna Jharna museum where you can see a Museum for Broom spread across 10 kilometres. Yes, you read it right! Hilarious but that would be peek-a-boo into the culture of Rajasthan and a must-go.

Do you believe in simplicity, then the ethnic Rajasthan calls you to celebrate its rural side. Image Source

Khichan, the name seems to come out of some odd diaries, I have never heard about any such place! I know you are thinking this but travelling 150 kilometres north of Jodhpur when you reach the small village Khichan, you would be left baffled. It is like seeing some wildlife channel live, as between August to March the village has thousands of guests who soar three thousand kilometres in seven days to reach here. Demoiselle cranes, the annual visitors of Khichan village are on spree here. It is just magical to see the numerous birds flock over the skies and leisurely spend their time here. If you are still puzzled about the reason, then it is because of the love that the residents of the village bestow. And to surprise you even further this village is not the bird’s natural migrating ground! It all started when people of Khichan started feeding them, building a unique connection that more and more cranes are getting entwined with their affection.

When Nature’s muckamuck migrate, you ought to have a look Image Source

While the whole city of Jaisalmer looks hysterical embroidered with the golden sand doesn’t it baffles you why this beautiful city is made here in the baking heat of Thar? Then here’s one more question to answer this. Would you believe that Jaisalmer came into existence because Lord Krishna signalled Maharawal, Jaisal Singh to build a city like this in that location? Yes, however surprising but it’s true. Now, before I take you to the shimmering golden fort, let me catch your reminiscence and take you again to Kuldhara Village which is merely 18 kilometres away from Jaisalmer. I reminded you about this ghost town for two reasons, first when you plan your trip to Thar you don’t miss it and second, I will tell you later.

Crowning the town, The Sonar Kella, aka, Jaisalmer Fort sits comfortably on Trikuta hills for around thousand years. The most unique thing about this fort is that its sandstones change colour according to the position of the sun and obviously the best is the yellowish golden colour on which the fort is nicknamed. This only living fort of India is a beauty to see. The narrow passages and the whole backdrop as you enter the fort carry you into the animated series Alladin. While the Rajputana havelis are the heartthrobs here, there is also a haveli which you may hesitate to enter. Yes, along with many people living here, the descendants of the prominent minister due to which Kuldhara was vacated also live here. You can visit the Samant’s haveli and I feel you should as like the village is rare even his haveli is quite different from others. First, if you remember the story you feel eerie which is like an adventure then you notice the strategically made irregular stairs so that enemies could not climb swiftly. Smart!

Though water looks contrasting, Rajasthan even doesn’t fail to awe you with its lakes.

Churu – The ghost town of Rajasthan

Around 200 kilometres apart from the first planned city of India, Jaipur, Churu is camouflaged under the mist of history. Entering the town, you feel as if you have entered the Ramgarh of Rajasthan where Gabbar has filched all the opulence that existed. (I know that’s weird! Blame the little Einstein sitting atop.) No Kings and queen have ever lived here but the grand ghostly Haveli’s say a different saga. It was the town of rich traders of past and each Haveli is the fine example of exquisite artwork. But now it houses the fluttering pigeons, cobwebs and solitude. What must have happened that this city was secluded? It is said that as trade grew in Calcutta and Mumbai, the residents of Churu settled in their places of businesses. Sad! But still going to Rajasthan and missing Churu would be a big travel blunder, Churu has its own eerie adventure.

The amazing abodes await for the residents’. Image Source

Rajasthan people’s timeless colourful practices and culture veils so many secrets that what you see in this state still remains a surprise. The wonder is just everywhere, whether it is the mysterious sand dunes or the ethnicity of the twinkling cities. Be it the enigmatic tribes or worshipping of rats and bikes, Rajasthan is just unimaginable. When you think you know it all the luring melodies of folk music cradled in this desert take you to another world; the spectacular Rajasthan, The Land of Wonders!