The sight of the moon is so peaceful that whether you sit in solace or with someone special it entrances you within itself. But just think when you are glancing at the mighty sky even you are being watched. Yes, whether we see the aliens or not but the fact is we are not alone in this universe. And if you feel that these are just the astronomical theories then let me take you to Ellora caves in Maharashtra where cave number 16 enshrouds some traces that will blow your mind. I am talking about Kailasa Temple and I must say that it is an underrated wonder of the world. It would be arduous to build such a gigantic and gorgeous temple even with modern technologies today then think, how did they do it 1200 years before? Get ready to be left agape after reading about the Kailasa Temple, the secret of another world.

Kailasa Temple – One of its Kind

Captivating environs, the mystifying aura and the mesmerizing architecture may have imbibed the spirit of Kailasa Temple but it has baffled the world for ages. As you see the first glimpse of this temple you are benumbed seeing that it is carved out of a single rock. It is one of the largest Megaliths in the world and the most stunning part is that it is whittled vertically, i.e. from top to bottom. In the world where foundations are laid first, have you heard anything like this? Some archaeologists date its construction in the 8th century and hinge the construction with Krishna I of Rashtrakuta dynasty in 756-773 CE but the strange part is that there is no such document which can decode the clandestine about the rise of this majestic temple. You must be thinking that these facts do not prove the Kailasa temple holding the secret of another world then here you go.

It is the epitome of Mount Kailash, the home of Lord Shiva and like the mountain even Kailasa temple houses one of the oldest Shivlingam and veils a mystery clinging with its architecture. Just imagine how much efforts would have been put in to quarry the rock to carve out for the temple with precincts embracing 45m width and 85m depth. Archaeologists consider that in approximately 18 years after digging out around 4,00,000 tons of rock, this mammoth temple would have been built. If we calculate roughly it would amount to 60 tons of rock daily and that too with the hammer, chisel and picks. Can you believe this to be humanly possible? Now when you look at the extensive carvings, over hundred feet pillars as well the bridges which link the small buildings to the main dome, at one hand you are enthralled seeing the exquisiteness and on another hand you are wide-eyed imagining about the anterior planning the builders would have done to bring out that perfect geometry. Even today if we employ the modern machine’s exhuming cannot be done with such finesse.

Maybe the memory of aliens visiting India is not that deeply edged in our cerebrum but the secret clues they have left for us always leave us bizarre. One such trace is the Shikhara (Top) of the Kailasa temple, where the splendidly carved statues of Lion are placed in such a way that from a helicopter you would see an “X”. Even if you open Google map right away and see the Kailasa Temple you will notice an “X” on the spire of the shrine. So is this any mark for the extraterrestrials to locate the temple? Now the question arises why the aliens would locate this temple. For knowing this you have to come out of the trance which this divine temple would set on you with its phenomenally carved pillars and panels depicting verses from Mahabharat, Ramayana and life of Lord Vishnu and Lord Shiv and then notice the small holes on the floor as well as the narrow secret passages which the temple has. Another incredulous thing about the sanctum is that it has rainwater harvesting system and perfect drainage system. 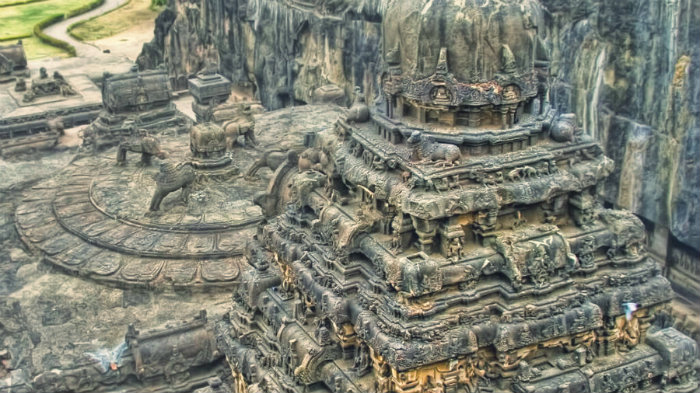 Intelligently carved and finely sculpted. This temple is exceptional beyond our imagination   Image Source

I agree that the rainwater harvesting and drainage were even in the Indus and Harappa civilization but why it is made in a temple and why are these holes made all over the temple floor and how were these narrow passages even dug out when humans cannot enter it in any way? Who made these passages and are these holes the ventilating shafts for the surreptitious underground city below Kailasa Temple? Alas! There are no answers to any of the question but the unfathomable tie-in that makes me ambivalent does not end here making me cling the fact that Kailasa Temple beholds the secret of another world.

You would not believe!

Do you know that this temple was even tried to be demolished but all the efforts went in vain? Muhammad Aurangzeb, the brutal Mughal Emperor who had demolished many Hindu Temple had even ordered his men to bring down this monument. In fact, over 1000 men worked day and night for three years to demolish it but all they could do was breaking the trunks of some Elephants which are carved on the base and disfiguring some of the sculptures. Isn’t it strange? I am just thinking what makes this temple indestructible?

Kailasa temple is the window to extremely fantastic and flawless architecture of ancient Indians maybe with the help of aliens. Let’s see when we get to know the secret of another world but even with that suspense, the ginormous and beguiling, Kailasa Temple is a must see. I know after reading the enigmatic details about the sanctum, you must be getting anxious to see this temple with your own eyes. The moment of amazement is calling you right forth.

How to reach Kailasa Temple at Ellora Caves