When I was a kid, one thing for which I waited eagerly was the vacation. It was not less than a festival back then. The time of the year, when Mom and Dad would still go to the office, but, I and my brother were free to do a hell lot of things. Amongst which, the favourite was our own kind of water sports. I knew it from then, water is magical. It can calm you or gear up your adrenaline rush or just be your pal on some lazy afternoon. This is the reason that when I grew up, lakeside and riverside destinations were the first ones to go in my bucket list. While I have already shared with you many such places, aka, Chandratal and Rishikesh and also the lesser known lakeside destinations, I had saved one lake which is just beyond awesome. In this blog post, I invite you to have an affair with peace, beauty and serenity all sutured together as you visit the enigmatic Lake Parashar, a place between heaven and earth. 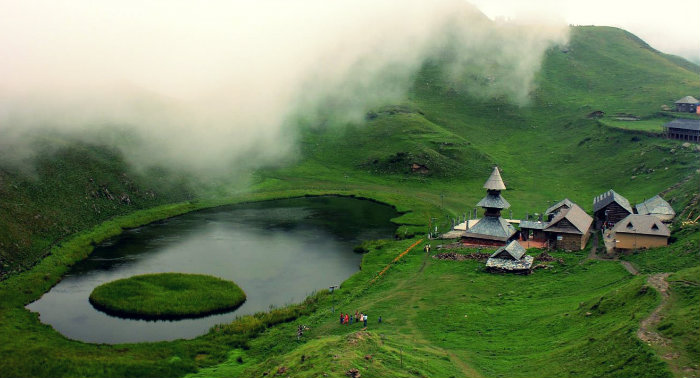 What you call as heaven, maybe renamed as Parashar Lake after you see the place yourself. Image Source

Himachal Pradesh, a splendid and mystifying state of our country never fails to appease its visitors. The snow-laden peaks, picturesque valleys, melodic waterfalls or the gargling rivers, God’s love seems to spread across in surplus. Adding to the beauty, the dramatic background created by the emerald cover of the state, makes you feel that nothing can be more appealing. Then the mystic places of Himachal Pradesh break your dream to stir the most fragrant aroma to the soul. One of which sits near the Varanasi of Hills, Mandi. While this Choti Kashi as Mandi is fondly called, is home to many sacred places and beautiful locations, it is also the gateway to exotic places like Kullu, Ladakh, Leh, Lahaul, few areas of Jammu & Kashmir and to Lake Parashar.

If you are trying to connect the cords and reminiscing that where have you heard about the name Parashar then let me be the coupling to your musings. The Lake Parashar got its name from the great Maharishi Parashar who is the grandson of Maharishi Vashisht and father of Shri Ved Vyas. In fact, he is believed to be the author of the first Purana, Vishnu Purana and there is a whole line of astrology developed by this sage. So you can say he is the one who had developed ways to peep into our future. Wow! But his excellence doesn’t stop here and next what I am going to tell about him may sound to you a bit unbelievable but the legends are like that. He is said to be in his mother’s womb for 12 years and knew all the Vedas by heart, way before his birth. And why this happened is a long-long story so let’s jump to the time when he came to Himachal.

When the beautiful ancient temple and virescent environs clone themselves on Lake Parashar, it’s a sight to behold. Image Source

In search of peace and to continue his journey inwards he chose the place where Lake Parashar is there in present. It is said that due to the lack of water, he hit the ground with his Dhandam and water came gushing in. The land where he stood while asserting the ground, still floats on this lake as the floating island.

Progressing from Mandi when you reach Baggi village and you decide to trek 20 kilometres up to Parashar Lake, you choose a path to heaven. After a bit of rocky trail and crossing through the forest, you see the teasing Dhaluadar ranges that behold the beauty. Amazingly, there are no trees near Parashar Lake and people say that the environs are still deferring the peace which Sage Parashar desired. Therefore, you just see the vast expanse of green land or if you go in winters it is the snow delight. All the mountains surrounding this beautiful valley seem to hide Parashar Lake in their arms. While the whole panorama is breathtaking, Parashar lake is breath lost. Pristine and surreal!

Scientists say that the floating island in this lake is because of the natural process and when grass and other vegetation accumulate from the neighbouring lands they would have formed the island. Remember, I told you about Lohtak Lake and its mesmerizing floating islands, but those islands were manmade. If I believe the scientists, then also, the perfect-round shape of the floating island in Parashar Lake makes it hard to believe. It seems supernatural just like this lake. And surprisingly, no one yet knows the depth of the lake and also the source of its water.

The Temple and its legend

The temple adjacent to the lake is yet another marvel which festoons this valley. According to the Urban Myths, this Pagoda style temple dedicated to Saint Parashar is built by a single Deodar tree and that too by a six months old child. Again, Unbelievable! But who knows what powers our ancient ones had. What we see is only the tapestry, the threads of past are lost in time.

So, a hike into the mountains is calling you for yet another adventure while the beautiful rugged backcountry is waiting to be taken as a souvenir for the soul.