Do you know the secret of Monalisa? Yes, the painting made by Leonardo Da Vinci which has been baffling humans for 500 years. At some point in time, I wondered why the scientists, historians and art fanatics are so mad about her smile. But when I came to know about Leonardo Da Vinci, I also couldn’t stop myself zooming the picture of Monalisa on my computer screen. Why it took him 16 years to complete it and this is not the solitary reason that tickled my brain? This Universal genius is known to hide the surreptitious messages in his paintings. The most amazing part about this man is that not only he was an expert in art but he had great wisdom about human anatomy, mathematics and physics. One more perplexing fact about this legendary man is that there is no evidence of his presence from 1476-1478 but when he came back astonishingly there was a rapid burst of creativity in him and this artist showed his excellence in all the fields. So, where he was? Well, I have left your mind in conundrum but the answer is still unknown. Teasing your brain further, now I will entail you from Vatican City to Tripura in Northeast India were 99,99,999 Gods are waiting for you in Unakoti. 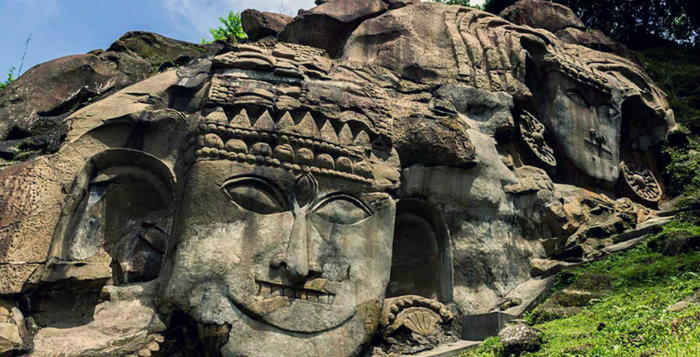 Unakoti – One less than a crore

Travelling 178 Kilometers from Agartala to Kailashhar and from there by moving further 8 kilometers you can easily reach the foothill of a rocky mountain which beholds 99,99,999 Indian Gods. This stunning sculpted hill of Unakoti in Tripura will leave you on tenterhooks with its first glimpse. These stone carvings are said to belong to the 8th and 9th century by the experts and this hill is proclaimed as Shiva Pilgrimage.  Seeing the mighty stone carvings you would feel how in early time they made this by cutting the rocks and stones. Some connoisseurs say that the stones and rock are not from this place rather they have been carved and brought here to create a masterpiece combining nature and art. But can you imagine bringing these giant-sized rock statues which are around 30 feet in height from distant places in old times when there was no such technology to help? So let me tell you the mythological folklore attached to it which seems more reasonable.

When Lord Shiva got exasperated

One tale which is quite famous about this place is that once upon a time, when Lord Shiva was passing through this region with other Gods and Goddesses while going to his favorite city, Varanasi. The retinues suggested that they should spend the night on this hill and then continue their journey to Kashi next morning. Lord Shiva agreed to this but he warned that they should leave the place with the first light of the morning. All one crore deities rested at night but when the dawn broke only Lord Shiva woke to continue the journey. This made him furious and before leaving for his abode he cursed the sleeping entourage to turn into stone till eternity. Thus justifying its name Unakoti, one less than a crore idols of divine beings are alleged to embellish the hill.

Beware, you are being watched. Visit Unakoti and feel the presence of God – Image Source

The other legend has a jinx with famous sculptor Kallu Kumhar who is deemed to be the worshipper of Goddess Parvati. So when ten million Deities rested on this hill which included Lord Shiva and his beloved, Kallu Kumhar pleaded Goddess Parvati to include him in their cortège to Kashi. On the qui vive when Lord Shiva was not ready to take him, the Goddess asked Kallu Kumhar to make one crore sculptures of the supreme and the escorts overnight to appease him. He did as advised but when the dawn broke he fell short of just one idol giving Lord Shiva a valid reason to leave him behind. It is also said that considering himself deific Kallu Kumhar made the last sculptor of his own self. Thus his wish was not granted and he became an example for humans that ego leads to downfall. I remember one of the doha of Tulsidas on this note 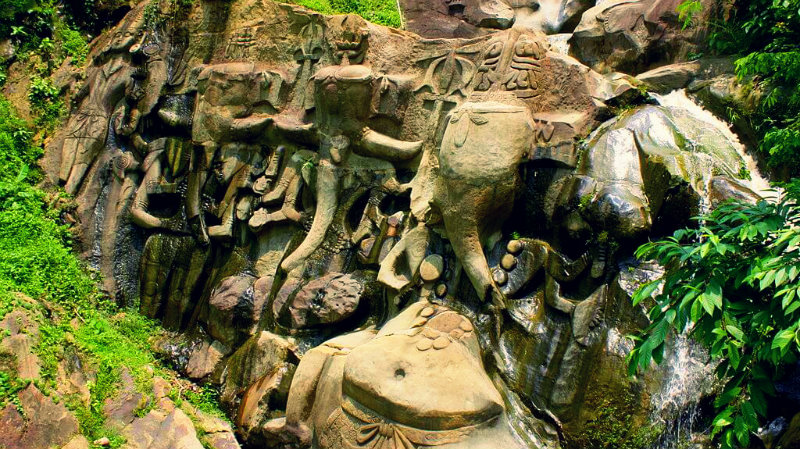 Some people even say that the Gods themselves left their impressions in Unakoti before leaving earth as Kaliyug started. Whatever may be the real story about the place but that doesn’t reduce the gleam of the place even a bit. Unakoti is one of the prevalent bas-relief sculpture site and has great mystery adorning it. The Archaeological Survey of India says many of the statuettes are yet to be excavated.

I just can’t imagine how the whole galore would be. Ending up, I would say pack your bags and visit Kailashhar to get allured by these holy rocks in midst of the green vistas. I am sure you would have never seen something like this. Explore this destination to believe it.