The 7 sisters of India is bestowed with immense natural beauty, rich history and a diverse culture. The North East of India apart from its magnificent climate has loads of unexplored jewels for a traveler. The beauty of these places lies in its non-commercial and unspoiled nature, which ought to be reconnoitered and explored to the fullest. Following are the few of the destination which would definitely take you to a different world, which are full of happiness and joy.

Living Root Bridges, Meghalaya– The living Root bridges are absolutely magnificent which very well can be terms as a perfect conglomeration of man-made with gods art. The state of Meghalaya have abundant of these bridges which tell a story of its past and take you to its present. 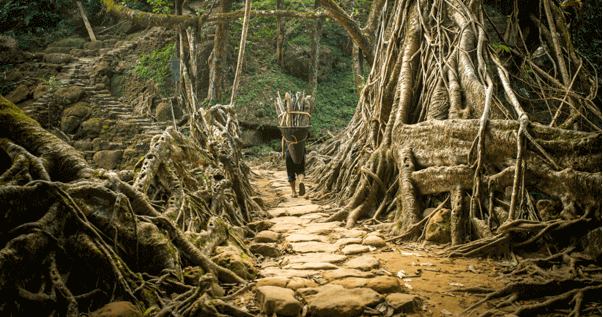 The Island Beauty, Majuli– Assam – This beautiful island in Majuli, Assam is the largest island on the river. You would get to learn a great deal about the Neo – Vaishnavite culture which was founded here. The art of pottery and mask making is adorned all through the world and is appreciated by many.

A Glacial Lake – Sikkim – If you wish to visit a one of a kind glacial lake which changes its colour every season, then it’s worth to visit the revered glacial which is based in Sikkim at a height of 12,000 ft. It is also a home to the Red Panda which itself is a very rare breed.

One of the fewest lake at the highest altitude – Sikkim – 7 Sisters : Paradise Unexplored – Image Source

Gangtok At Night- This magnificent city of Gangtok is absolutely mystic during the day, however it’s divine to see it at night from the edge of a mountain which appears as if millions of stars are twinkling on a clear night.

Mother’s Market, Imphal– A market exclusively ran by women. The Mothers’ Market Imphal is a must visit market which only caters to women products which dates back to the 16th century. In the olden days, women found a livelihood when they produced handicrafts and intrinsic jewelry to sell it in this market, today the market is full of energy and is flourishing in all areas whether it is cloths, jewelry, food etc.

Siroi Hills, Manipur– The Siroi Hill is famous for the Shirui Lily which also known as the State flower of the Manipur. There is a story behind the hill, which is that a young couple who were very much in love jumped from a cliff and had an untimely death, the flower then blossomed in the same place and is now spread all across the hill. The hill which is covered by the flowers look delightful to look at. 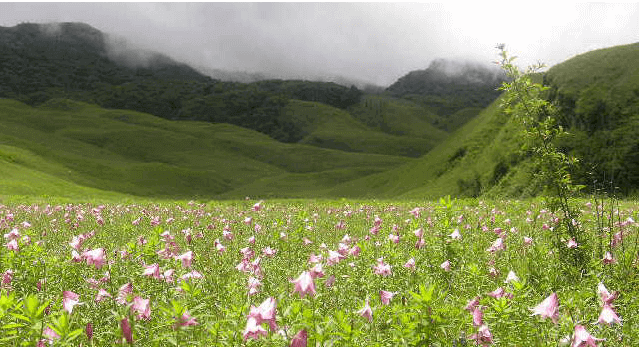 Mizo Poets’ Square, Mizoram– The Mizo Poet Square is a salute to the Mizoram poets and novelist who presented great work in the field of literature. It is inspired by the Poet square in UK. The Mizo Poet Square attributes 33 Mizo poets and novelist who contributed extraordinary input towards Mizoram literature and writing. It’s indeed a worth visiting place for people who are interested in art and writing. It’s not only an inspiration but also dedication to keep this art alive.

Neer mahal, Tripura– Neer mahal as the name suggest is a popular lake palace which is situated in the center of the Rudrasagar lake in Tripura. It is very similar to the Jal Mahal in Jaipur. A visit to the Neer mahal is an absolute must which is situated around 50 kms from Agartala. Its beauty is intoxicating and is also known to be one of the seven wonders of India.

It is rightly said “East or West India is the best, India as a country is equally beautiful from all dimensions, this has been proved that East, the land of 7 sisters is blessed with different and diverse aspects which attracts tourist from throughout the country as well as around the world.