How about visiting a forest which has a natural bluish-purple carpet? If you think I am making up or describing one of the magical places shown in the Disney movie, then, you should certainly visit Hallerbos in Belgium in springs. You will go breathless with the very first view of the forest. The blue bell flowers and the green slender trees create an optic illusion that you are standing in midst of an animated movie. Now when I have already taken you to the enchanting world of animation which is actually real then there is one more such place which will charge your nerves. Chandratal Lake, Himachal’s best-kept secret is one such destination which will enthrall you with its surreal beauty and the tale which the place holds will certainly remind you of the classic Disney movie – “The Little Mermaid”.

Beauty at its best

If you think that visiting Kullu, Manali, Shimla, Dharamshala, Mcleodganj and Dalhousie you have seen the most entrancing side of Himachal Pradesh. Then let me tell you that this is just the beginning. From Manali when you ascend to the height of 4300m you discover Chandratal Lake, Himachal’s best-kept secret. Cloistered between the mountains in Spiti Valley, this moon shaped lake is like nirvana for any nature lover. The lake is so crystal clear that when you look through the water you would feel that you are looking through an unblemished glass. Resembling the tempered glass screen that is just been replaced with a new one which is unsmudged by any hand prints. The pebbles with different hues of brown and greys, clearly visible on the base seem like a doorway to the underwater world. While the color changing sky along with its puffed white clouds and gigantic mountains makes a tapestry which would put you in trance.

How lucky are these mountains and sky fringing Chandratal Lake, after every few minutes they are able to see themselves dressed in vibrant hues and embellishments while we use some new age software for this. Irony! We have developed. 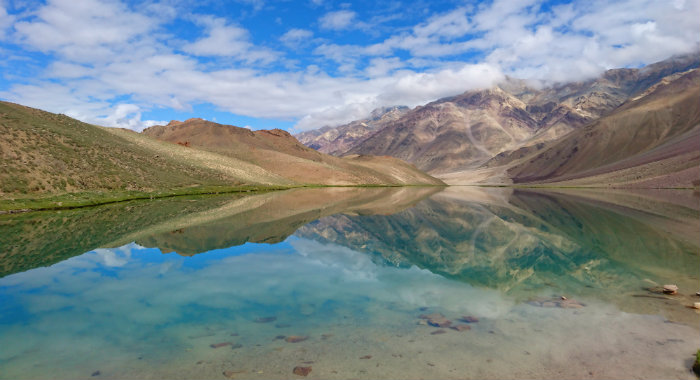 Revered as the celestial lake by the people living in the neighboring village, Chandratal Lake has such a magic that even an atheist may start deifying the lake as the deity of beauty whose very sight is beyond words and beyond belief. I am surprised that this supernatural lake is still untouched by many travel lovers. But I think after reading the story of this lake, you will feel the tickle to travel and see the mermaids. Yes, you read it right, you may see a mermaid here as per the belief of the locals here.

The folklore says there was a shepherd who was a pure-hearted person. Chandratal Lake and its environs are very green so this shepherd went there to give his sheep a good treat while he sat down beside the incredulous lake riveted by the exquisiteness of the lake. Like the shooting star, a mermaid appeared before him just out of the blue, he could not believe what he is bequeathed with. Before he could pinch himself to feel whether it is a reality or a dream, he was invited by the mermaid to their world, floating with the mermaid into her kingdom, awestruck by the beautiful underwater palaces and fairy world. Imagine, such a stupendous gift for innocuousness but then all good things end soon so did this one and he was brought back to the world he belonged. As the shepherd was about to leave taking loads of phenomenal memories, the mermaid made him swear that he would not reveal this to anyone or else he would die.

You would be disappointed to know what happened further and I cannot leave the story incomplete. Yes, the shepherd went to his village and spilled out the beans about the miraculous experience he had and as per the prophecy, he was found dead.

Well, I am sure you must have visualized the vibrant underwater world of Mermaids and the palaces and must have experienced the goosebumps. Chandratal Lake, Himachal’s best-kept secret, is waiting for you to endow you with many breathtaking moments which you still have not imagined.

They say you can still see “them”

If anybody tells me that he has never thought about mermaids then I would say he is lying. The existence of mermaids may be ambiguous but our imaginations have been captured by them from ages. If you too are fancied by them then there is good news. You may still see a mermaid if you are an untarnished pure-hearted person. I have seen them or not? Let’s leave this question unanswered. To tell you I have one more surreptitious belief jinxed to Chandratal Lake. It is said that if you circle the whole sacred lake and make a wish, your wish would get fulfilled. 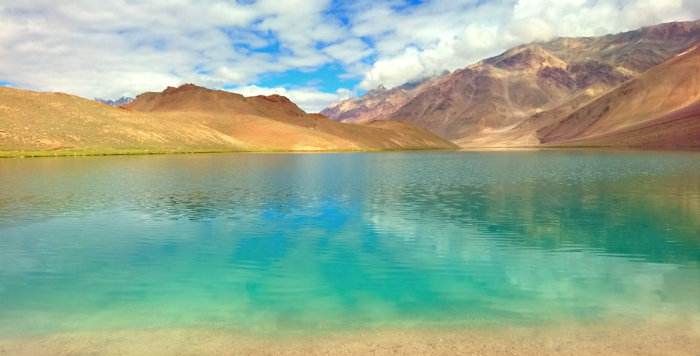 Partnering with the mist & the wind when you trek through Hampta Pass and reach Chandratal, your journey will be bestowed by fantastical scenery embracing waterfalls, green as well as snow-capped mountains and hazy clouds. For me, Chandratal Lake is like an alchemy which turned the water into finest of mirrors which reflected even more striking replica of nature around and above. So if you are packing your bags and planning a trip to Chandratal do inform me. I am always ready to hear the music from nature’s gramophone played through the serene blue disc of Chandratal.

How to reach Chandratal Lake.

Chandratal, a paradise for trekkers and campers is situated in the Manali district of Himachal Pradesh. Best time to visit Chandratal lake is from May to October.

Other gateways to reach Chandratal lake is from Kunzum Pass and Batal which is walkable.

Accommodations options are also available which approx 5km from the lake on pre-booking basis.