Do the needle point turns of mountain evoke the butterflies in your stomach and travelling to mountains and hills excites you? Then Kasol is calling you to embrace you within itself and hypnotise you with its beauty.  Kasol is also known as the Mini Israel of India which sprinkles a Jewish feel to the place. It is a village in Himachal Pradesh which is stretched alongside the scenic Parvati River. Kasol is a beauty to be in awe of. It will make you speak for the untouched wilderness, your own space to breathe where even your isolation speaks with you. A place which makes every traveller skips their heart beats. But also what you need to know is Kasol is also “a hub for the bold traveller”. Baffled!

Coming to Kullu-Manali region and missing out Kasol is like eating only the topped ice cream from the softy cone and ignoring the ice cream inside the cone.

Lithe, lyrical and lusty, Parvati Valley seems like the plot of a dreamland with the panorama of the snow-capped Himalayas, lush green pine trees and miraculous blue sky. The snowy mountains with clear sky make you believe in the ardent glory of such scenic beauties, a gift from nature which adds to the flamboyant nature of the mounts and the mystic feel which is nonetheless intimidating. The surroundings are supposed to make you experience unperturbed pull, the charisma speaking for the aura of the place.

Explore Kasol – A Hub For The Bold Traveller.

Kasol – a hub for the bold traveller, is a perfect destination for the ones who loved to be enveloped by natural beauty, the adventures treks and for those who want a mind-blowing holiday without taxing their pocket much. A fast emerging place for trekkers to have a soul satiating and a remarkable experience for life. It is also a hub for bold parties & cafes serving you with international cuisines and delicacies for the foodie in you. 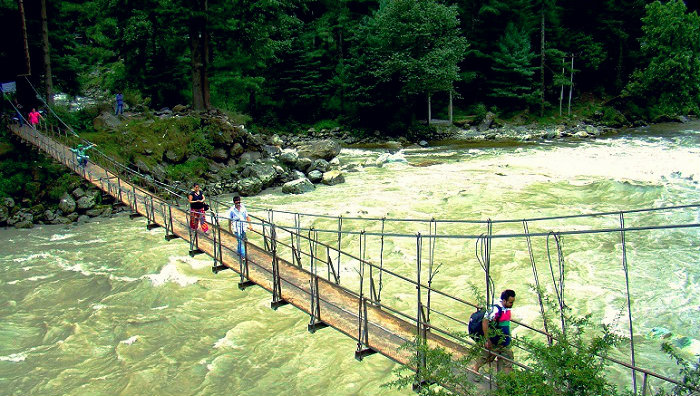 A perfect destination to get lost, never to be found – Image Source

To kick start your Kasol visit the Parvati River is first and foremost location. Amidst the stunning mountains, the serene surroundings and tranquil air near the river will invigorate you from within. Camping near the riverside is a captivating experience in itself. Apart from getting apprehended by the stunning scenery, Parvati River in Kasol, allows you to indulge in fishing, rafting, trekking and bonfire activities. In the stories about your visit to the place, crossing the wobbly old wooden bridge will automatically come in your narration as one of the thrilling experience. 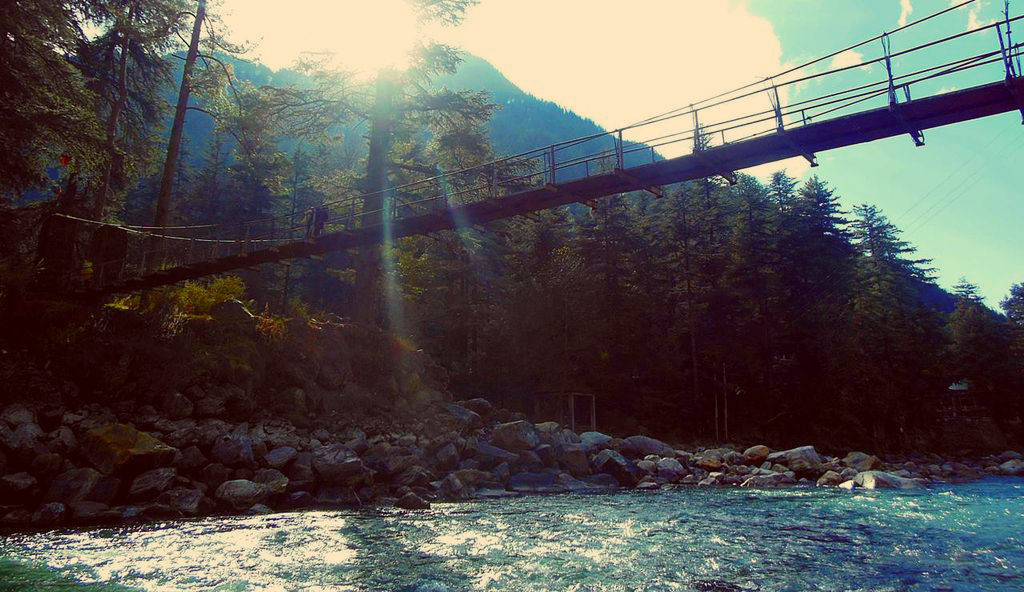 If you like surprises then nature has it all for you. You just cannot miss this! – Image Source

KheerGanga, an exquisite location in Kasol which will charm you with emerald green panorama. It is deemed to be amongst the easiest and delightful treks with nine hours climb on the narrow and tricky trails. The dusty routes which in all hail will ask you to come again. What you receive as accolade after that is higher than any priced possession. The heaven awaits at the top, the clouds, the pine and apple trees, snow laden mountains and the divine Lord Shiva’s temple which has mystical hot spring bath to rejuvenate yourself from within. 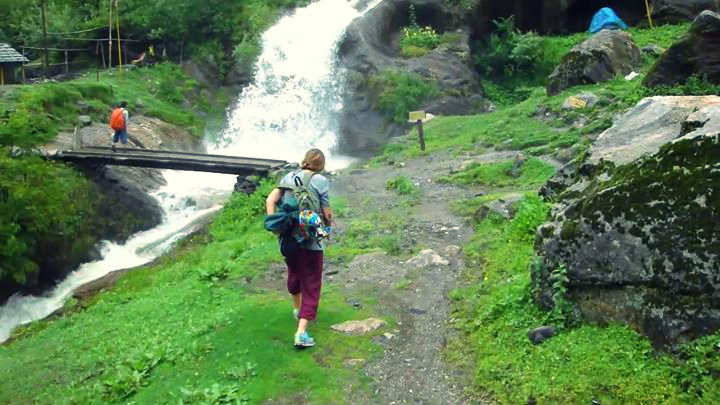 A walk through sublime nature and rejuvenate you. An experience like never before –           Image Source

Tosh, a small village in Kasol which witnesses most of the hippie culture and is a nerve wrecking experience for the travellers with such stunning views it has to offer and the tranquillity and calm it provides amidst all the chaos. A mere 20 minutes drive from Kasol, makes you witness a place totally exquisite and hard to believe, for its presence in India. Tosh is famous for its specially engineered wooden houses and hot springs which add as another colourful streak to the beauty of the place.

Chalal, a dinky village, a hub of trance music and psychedelic parties in the Parvati Valley.  It is also known as a Bob Marley country. You would never know the sadhu next to you could be “The Lord Of The Dope”. All just looks calm, but real trade happens here. Chalal is the second home for the party freaks and those who are in search of smokey peace. 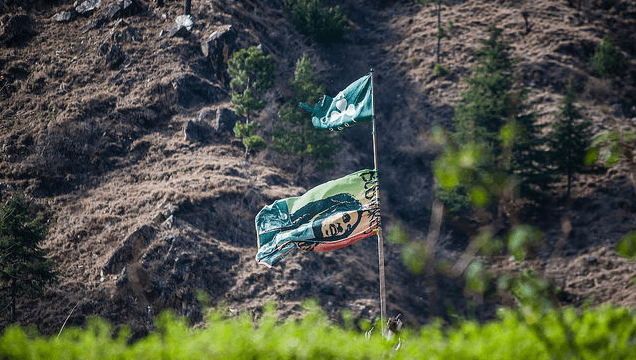 Kasol – the valley of hash. Hub for trance and psychedelic parties where celebration goes on for weeks – Image Source

Malana, being another such beautiful and necromantic village, especially for the travellers who keep perceptive of the lives of local inhabitants and take this village to be a blessing in disguise for its charm. Not only this, but this place is famous for its cultivation of Malana cream – a specific type of hash, a pivot for blowout and binge. The village, distinctively known for its quietude, lull and nonpareil way of living provides a prospective view of the living over there and a satiating experience to learn about different cultures and the authentic belongings. 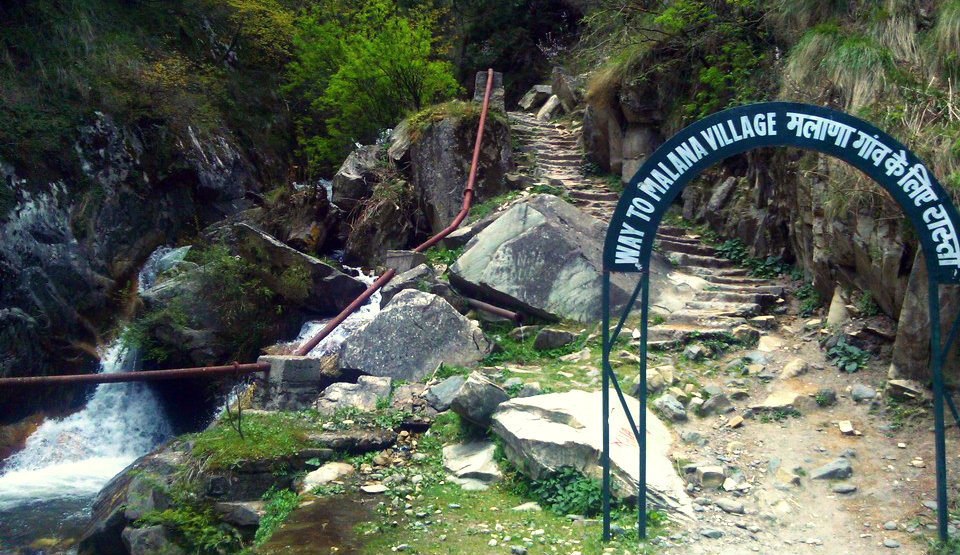 A hub for the bold traveller. It’s a big picture in a small frame which says it all – Image Source

Tirthan Valley, Naggar Village and Bhuntar Town are other beautiful neighbouring locations near to Kasol.

Other Famous strings of Kasol

Any trip seems incomplete without the shopping and the streets of Kasol are great for shopping wonderful winter clothes which are cheap as well. Indulging in Israeli food is another experience for which you have to land into Kasol. Turquoise Kasol and The Evergreen are two famous restaurants where you can hop in for mouth-watering Israeli food and desserts which are weirdly named as Hello to the king and Hello to the queen. It’s also the venue for rave parties, viz. full moon rave party and others which have moved from Goa to Kasol and add on a chapter of mystery in Kasol diaries.

The place for loners to have enchanting experiences and a hideaway amongst nature’s best-kept secret. A self-sufficient small yet an exciting place to go to and wrap up with some wonderful lifetime experiences.

How to reach Kasol

Kasol located at the high altitude, there is no direct connectivity. But its is best connected by road. Delhi, Chandigarh, Pathankot and Bhuntar which is near Kullu are well connected with Kasol.

Pathankot is the nearest place to Kasol which is 150km. There are frequent buses and taxi service available.

Bhuntar airport is another closest place to Kasol. It is approx 35km which is 45 min journey. Once you reach Bhuntar airport which is near Kullu, there are regular buses and taxi to Kasol or Manikaran.

Once you reach Delhi by flight or by train, take a bus which starts from the ISBT Kashmere Gate to Bhuntar which falls 50km before Manali. Travel time between Delhi to Bhuntar is approx 12hour. Get down at Bhuntar and take another bus to Kasol which is 45 min of drive or you can also hire a taxi which is expensive. There are regular buses which ply from Bhuntar to Kasol which should not be a problem.

What are you waiting for? Pack your bags for this magnificent place and give your mind a heavenly break from the hustle bustle of life.

One thought on “Kasol – A Hub For The Bold Traveller”