What if I told you that you can find a treasure by just decoding an ancient script? Yup, it is true. The Son Bhandar Caves in Bihar are just waiting for someone who can read out the message written in Sankhilipi and open the obscured wealth almost magically. That brought the reminisce of “Khulja Sim Sim!” Isn’t it? How entrancing it seems! Akin to the rush which you felt right away and the eagerness to try your luck just once must have been also felt by various rulers who invaded Kangra Fort. Are you puzzled how Kangra fort came into the picture? Then read what this fort had, “A treasure that the back of camels could not carry, nor vessels contain it, no writer’s hand record it and nor the imagination of the mathematicians conceive it.” Whoop! Don’t you think even the words about the fortune of Kangra fort are so wooing? Coming from the times of Epic Hindu literature of Ancient India, the awe for this fort has weaved the legend of the Kangra Fort depicting the sovereignty of Katoch Dynasty. 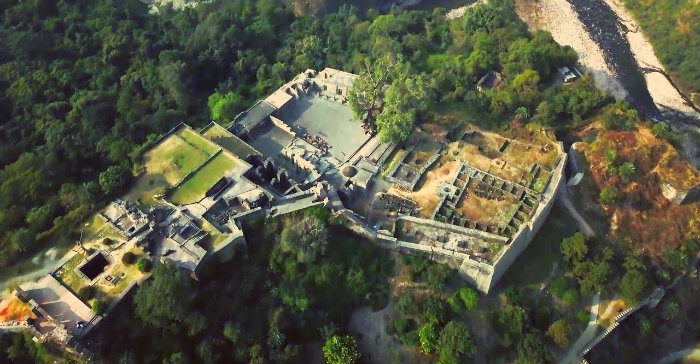 Himachal Pradesh truly knows how to stimulate our senses in all regards. Himachal’s natural beauty is unmatchable with snow-laden peaks, picturesque valleys, melodic waterfalls or the gargling rivers. Everything about this state enchants me to go there and discover its different placid regions. But I did not know that in the arms of nature I may get to know the fables of history. So, when you plan to take a brief escape from the maddening urban life into the pristine little town Dharamshala then do plan a trip 20 kilometres away to Kangra Fort. At the height of 760 metres, Kangra Fort is such a visual retreat while the tales from past leave you wondering.

There is a famous saying about this oldest fort of India, “ He who holds the Kangra Fort holds the hills.” The saying is enough to lure other kings. Now just imagine the enticement combined with the immense treasure Kangra fort had.

Mythology has a tale to tell

This verse from Durga Chalisa which we have been chanting from our childhood along with our mothers has an interesting story in context to the Kangra Fort. When Goddess Ambika was battling with Rakhtbeej whose every falling drop of blood created a new version of the demon, a drop of her sweat fall on earth. This gave the origin to Bhumi Chand, the founder of Katoch Dynasty, who helped the deity fight the battle. This pleased the Goddess and she blessed him with the Kingdom of Trigarta which is now known as Kangra in present times. The fort was thereafter built by Maharaja Susharma Chand Katoch which became an epitome of Sovereignty of Katoch Dynasty. Interestingly, King Susharma Chand is known to have fought by the side of Kauravas and there is a mention of Trigarta in the Mahabharata too. I just wonder how old is Kangra Fort? 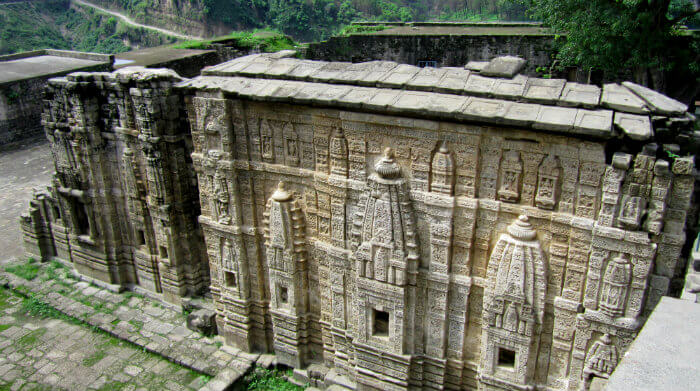 Would you believe that this ancient temple in Kangra fort was unaffected by the earthquake? Image Source

Designed in the shape of an ear, Kangra Fort sits atop a hillside on the confluence of Banganga and Manjuli. Though this circumspect fort is guarded by nature and high rampant black stone walls, the lure of treasure could not stop its enemies. As per the recorded history of Royal Kangra, it is even said that the Kangra fort had such volumes of gold, silver, pearls and precious stones which no Royal treasury ever accumulated. Er! Control your emotion or else your eyes would pop out; there is more to add to your amazement. Are you wondering, from where did so much of wealth come? Ambika Devi temple in Kangra Fort was so celebrated that the devotees bestowed their valuables to be bequeathed with blessings of the Goddess. With time this accrued in such wondrous amount.

It is believed that Kangra fort had 21 wells of riches which were 4 meters in depth and 2.5 meters in circumference. In 1009 AD Mahmud of Ghazni became the first successful invader of Kangra Fort and looted eight of its wells. Henceforth, started the vicious cycle of invasions and reclaiming of the fort until Britishers captured it. Britishers also discovered five wells and plundered the wealth stored in them. Then when Katoch Kings were not able to recoup their fort, nature did the job. In 4th April 1905, a strong earthquake damaged Kangra Fort to such an extent that no one could live there ever after that. But just hold on. Did you count that I told you only about 13 wells, then what happened to the remaining eight wells? Yups.They still are camouflaged in the Kangra fort, waiting for the pioneer to unfold the veiled history.

Catching the melody of the bygone era

“You must pass through the gate leg first, never lead with your head because if there’s an enemy on the other side, you might lose your head.”

Listening to exact proses which the King told to their heirs is just amazing. When you reach the Kangra Fort you can accord yourself with the audio guide and hear the tale yourself, along with the references of royals. The stunning Dhauladhar ranges, the crooning of streams and the virescent environs in conjunction with the fables of history being whispered in your ears, is an experience which is indescribable. You have to pack your bags and get going because besides the Legend of Kangra Fort your own travel diary is waiting for your new travel story.