Mughals ruled India for three hundred years and during that span of time, they have sprinkled their essence in every walk of life. Our Childhood was honeyed by the witty tales of Akbar and Birbal, then growing up we got spellbound with the pungent Mughlai Cuisines and finally, we lost our hearts with the epitome of love, Taj Mahal. Finding its place in Seven Wonders of the World, Taj Mahal has been one of the finest examples of Mughal architecture. But do you know the design of this splendid tomb is inspired by the tomb of the second Mughal Emperor of India? Crafted in the heart of the garden of paradise – Charbagh, Humayun’s Tomb was the first garden tomb in the Indian subcontinent and biggest in whole Asia in its time. Magnificent, enticing, extraordinary and what to say I am falling short of adjectives defining this opulent monument and to mesmerize you further, I want to share the tale beyond.

Now that is the royal way to bid adieu – Humayan’s Tomb.

As said, everybody has to fight his own battle; Emperor Humayun too had to face his share of struggle. He lost his kingdom, losing a battle with Sher Shah Suri in Kannauj and had to elude to save his remaining wealth along with her wife Hameeda Begum and his most trusted army men. He travelled from Punjab to Thar desert and then to Sindh in Umarkot where his successor, Akbar, was born. But this did not bring the end to the fugitive life and his nomadic journey continued for 12 long years in which he travelled for 12000 kilometres in different kingdoms. It was with the help of Iran’s emperor Shah who agreed to help Humayun with army force that he charged back to reclaim his lost empire in India in 1555.

There is a saying that if you want to jump a swamp, you need to make a long hurdle, Emperor Humayun exactly did that but the fruits of his success did not last for more than six months and he was robbed by his own destiny, losing his life in an incident. How awful is that? But like his reign, even his death revelation was quite dramatic. I was amazed to know that his death was kept secret for many days just to stop the sneaking suspension. He must be having very loyal entourage otherwise you know nothing is faster than a rumour. It was because of this that his thirteen-year-old lad, Akbar, was fostered to take charge in the meanwhile to carry forward the tale beyond limits.

How the Anecdote of love begun

Some historians believe that Hameeda Begum commenced the ideation of building a tomb for his beloved husband while according to some it was the first wife of Emperor Humayun who after returning from the Haj embarked the beginning of Humayun’s Tomb, making it her life goal thereafter. But this was not the only baffling fact about the tomb, I was more puzzled when I found out that the construction of tomb started in 1565, that is, nine years after the death of Humayun. I could not get any justification for this which makes me believe that maybe some historians who say that tomb was fathered by Akbar are right as this could be the reason that when he grew up as a man he thought to dedicate a masterpiece to his father. Then in 1572, the body of Humayun was shifted from Purana Qila to the newly made tomb. 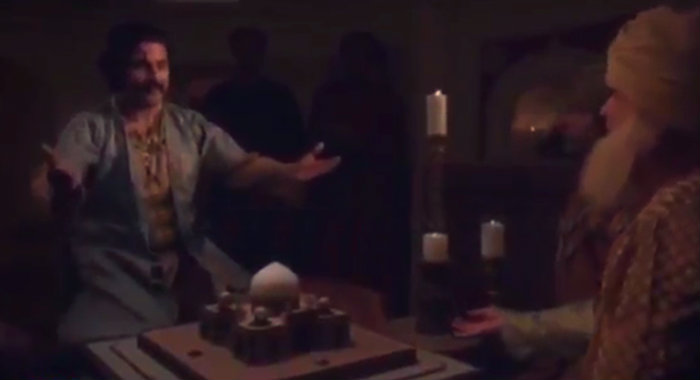 The Trance of Humayun’s Tomb

The truth of the fabricator maybe in wraps but the spell which the magnificence of the tomb would cast on you is unaltered. If I had been living in Delhi then my favourite getaway in winters would have been the heavenly garden of the mausoleum. Humayun’s tomb is a stupendous synergy of Persian and Indian architecture and the red and white sandstones were used so extensively for the first time. When I saw the cairn it was hard for me to believe that it is not a palace when even the entrance gateway was having rooms over it. Just imagine the size of the tomb, there are 72 doors below the main tomb which reside the body of 107 Mughals along with Humayun who was the first one to be buried. 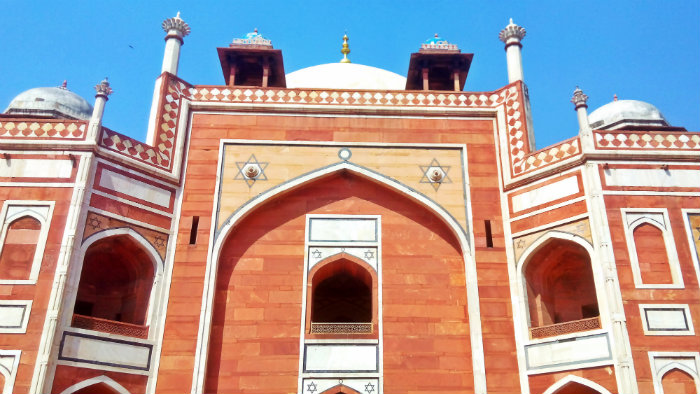 This spectacular blend of Mughal and Indian architecture makes you wonder that is it a tomb or a palace. Humayun’s Tomb – A Tale Beyond

When you see the main tomb building from near you notice the fretwork, the small blue domes and many other fine sculpting and you are like, “Oh my God! Now I know why it became an impetus for other rulers.” I could not believe that even death can be enamoured in such a marvellous way. Then when you step into the threshold of the main hall you time travel to the bygone era seeing the exquisite reticulation on the windows, mesmerizing ceiling work and the overall aesthetics. You end up being in reverie imagining how beautiful it would have been back then and after knowing the tale beyond the present peripheries the trance would be more lifelike. 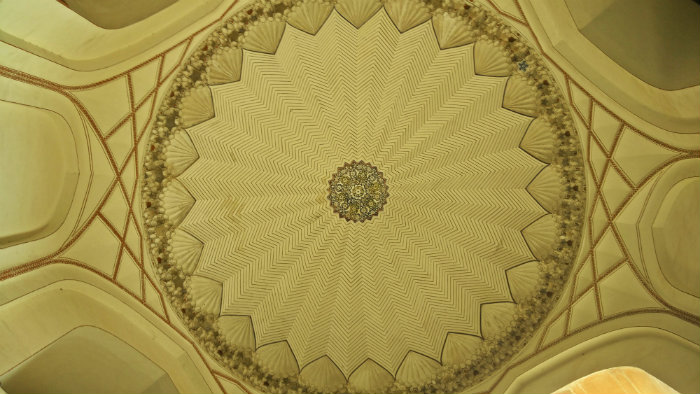 The ceiling on the top of the Emperor’s Tomb seems like the divine eye crafted by humans.

Only if it was Taj Mahal

Like Humayun’s life, his tomb has also seen various ups and down. It was ignored when Mughals shifted their capital to Delhi from Agra and then when the British East India Company captured Delhi, the tomb’s garden which is the symbol of seventh heaven was manoeuvred into English Gardens and cabbages and tobacco were grown in it. But the most woeful detriment happened when during the partition it became the refugee camp for Muslims for five years. The plight of the wondrous mausoleum ended when in 1993 it was declared a world heritage site then its restoration work started.

Standing in the core of busy streets of Delhi, Humayun’s Tomb is a mirage which turns real when you enter it. Whenever I am in Delhi I never miss a chance to visit the mausoleum and relive the tale beyond and I hope you too would experience this unfathomable journey from words to verisimilitude when you be the part of it.

How to reach Humayun’s Tomb

Humayun’s Tomb is situated in the buzzing city of New Delhi which is very much accessible by all means.

By Road: As Humayun’s Tomb is located in the city hence it has well connected by roads with the major cities like Jaipur and Agra which are the closest city and prominent tourist location.

By Air: New Delhi Airport, Jaipur Airport and Agra Airport are the closest airports and regular buses ply between this destinations.