My mother keeps on nitpicking me from time to time saying that my travel infection is getting severe day by day. I smile at her and say, “we travelers are like the ancient phoenix bird mom.” Like her, if you also find this connection queer, then here is an explanation to this. The mythological bird Phoenix has supernatural power to take rebirth from ashes. As per legend this mythological bird Phoenix lives beyond 500 years and across the epilogue of its life, it travels from Arabia to Egypt and when the sun rays burn its nest, it revives into a fledgling and returns. Likewise, whenever we travelers feel encumbered with the chaos of life, we go on an excursion and come back as a new regenerated self. I know the jinx still sounds bizarre so leaving my context, let me take you to the place which like the bird has come back to life after hundreds of years, Bateshwar temples, the temple town of Madhya Pradesh rising from the rubble.

Maybe the dacoits we knew in 90’s are history now but still whenever there is a mention of isolated, ‘Chambal ki Ghati’, our cognition ditches us and the reminisce of the dacoits strikes back. So let me weave a journey for you in the Chambal Valley and change your memoirs permanently from this travel blog. However, the rebirth of Bateshwar temples cannot be separated from the dacoits. In fact, you would be surprised to know that it is also because of the dacoits that the Bateshwar Temple group could take rebirth from the ruins and the mound of broken stones.

Just 60 kilometers from Gwalior and 30 Kilometers from Morena, Bateshwar Temples are camouflaged in the ravines of Chambal Valley. The most amazing thing about this temple complex is that there are about 200 temples of sandstone made in row one behind other. It is anticipated that the temple group was built by great Gurjara-Pratihara dynasty with early temples in this complex starting from 7th -8th Century. The verbal meaning of Pratihara is the gatekeeper and like the meaning, Pratiharas believed themselves to be the janitors of Hindu civilization. They built many temples although the Islamic invaders were leaving no stones unturned in destroying the Hindu temples. And if you are thinking that it must be these Islamic invaders who destroyed these temples, then to bewilder you a bit, there are no such clues. 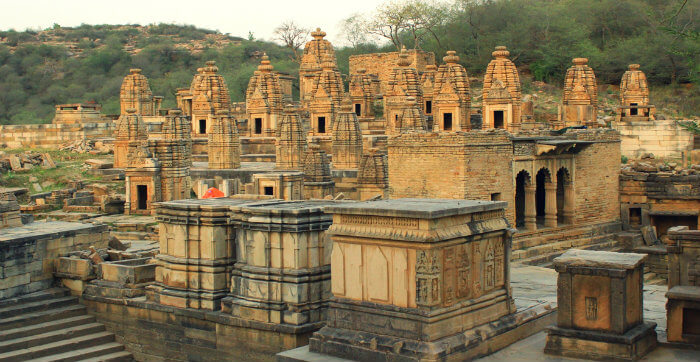 Though these invasions effectuated cultural destruction of Morena and this heritage was taken over by the forests of Chambal. Finally, the devastation of Bateshwar temple happened around 12th and 13th century and historians speculate earthquake to be the cause of it.

The Dawn of Bateshwar Temples

The Bateshwar temples were only like a forgotten affair until, in 1920, Archaeological Survey of India declared it a protected site. Now you must be thinking where is the role of dacoits in this? Though Batehwar Temples became an ASI notified location but due to the parlous dacoits, the location was treacherous. But the solicited ravines of Chambal and dense cover of jungle along with the rebellious dacoits ended up being the blessing in disguise for the Bateshwar temple complex. The ruins of the temple town remain intact and the idols of the deities Shiva, Shakti and Vishnu were also not stolen or smuggled from the place. Thus, when the ASI started its restoration work in 2005, the heap of stones started shaping up into the columns of the temple. However, I still cannot imagine how they figured out this puzzle. #SMH

But didn’t I miss out something? ASI team was not like the Jai and Veeru that they cleared out the dacoits and started the restoration work in Bateshwar. So, when in 2005 before doing anything at the Bateshwar site, the officials had to convince the so-called dangerous dacoit of that time, “Nirbhay Singh Gujjar”. From inciting lures about their predecessor Gurjara dynasty and persuading them to help, calling it their inherited responsibility, ASI did a remarkable job. I think even Sippy Films failed to be so creative. LOL!

In its Golden Days, the Bateshwar Temples must have been a Pilgrimage for the devotees of Lord Shiva and Lord Vishnu. Image Source

The tale of Bateshwar Temples and The Rebels

Maybe if you tell your parents or grandparents that your next trip would be to the temple town, Bateshwar, an array of promises and swears may be recited to stop you. This is not only because of its location in Chambal ravines. Bateshwar Temples was the place where the dacoits, the Baghis, took their oath to be a rebel by offering a bell in the temple. Even for the success of robbery, prayers were made in Bateshwar temples. Then after their victory, they presented a part of their loot to the deity in form of the bell. So don’t be amazed to see so many bells in the temple complex.

But going to Bateshwar Temples, Morena and not being amazed is like doing Bungee Jumping without yelling out in ecstasy. I still cannot understand why so many temples were made in one place as there is no justification for it in records. If you are able to explore it during your visit, do tell me. In the meantime, as each temple in this complex is rising from ruins, the magic is coming back to life, just be sure that you do not get too late to experience it.