When I was in school in my 6th grade my teacher told that the speed of light is more than sound’s speed and thus when there is thunder you first see the lightning and then after the fraction of seconds you hear the sound. I was really amazed to know this and when I noticed it myself I felt how I overlooked it? God is wondrous. The other day I was watching National Geographic and I came to know about the Lyrebird which is one of the acoustic marvels that exists in this world. This bird can repeat every sound it hears from car alarms to camera shutters and from other bird voices to human voices. Unbelievable! Right? I think I have tickled your curiosity. So let me enchant you further by disclosing the two Acoustic Marvels Of India which will leave you agape. 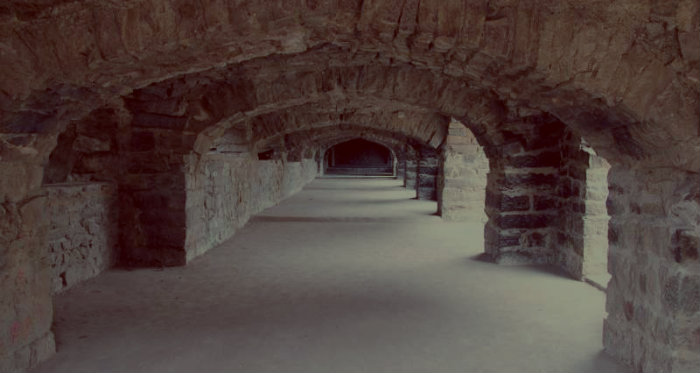 Do not underestimate the Acoustic Marvels of India, especially, Golconda Fort where sound is the first line of defense – Image Source

A shatterproof defense system in Hyderabad

The ringing phones, the slamming doors, the screeching chairs, Aah! unending noise all around. In the cacophony of different deafening sounds in today’s world, it is hard to believe for you and me that even a sound of clap can be used as a signal. But the acoustic marvels of India like Golconda Fort is like an awakening. Ibrahim Quli Qutb Shah, the King who built the Golkonda Fort was believed to be the expert of physics. The anecdote of his intelligence was quite evident to me from the very first sight of the fort. When you enter the fort its acoustic effects are all ready to astound you to the deepest core.

Imagine the sound of a clap reaching the 400 feet high Citadel from the entrance. Mind-boggling? Even more stupendous was the use of this acoustic effect, combining it with different signals for different happenings. So in case of enemy attack, the guards of the citadel will be forewarned. It is believed that the 24 diamond shaped crests on the roof make the sound travel but nobody till date has been able to crack the mystery.

From the entrance when you see the fort further, you will be amazed to see how intelligently the fort was planned to put everything in order so that sound could travel easily. The hall where the public assemblies were held and the hall where relatives and sometimes soldiers stayed were designed in a way that even the whisper made by them could be heard in King’s bedroom. If you are wondering with so much security what the fort was actually veiling? Then let me tell you that Golconda was famous for diamond excavation and Kohinoor, Daria-i-noor, Hope Diamond and other famous diamonds were believed to be stored in Golkonda fort. Even the arches of Rani Mahal in the fort were believed to be festooned by diamonds. Whoa! I just wonder when the relics are so beautiful how grand would have been the fort at the time of Qutb Shahi dynasty when it was fully embellished.

This acoustic marvel of India had an unbreakable security but its downfall happened due to the betrayal by one of the ministers. As a result, after two failures Aurangzeb finally stood victorious to capture the Golkonda Fort in 1687.

The epitome of love in Bijapur, Karnataka

“Don’t let the noise of other people’s opinion drown out your own voice”, I wonder whether Steve Jobs visited Gol Gumbaz? I am saying so because this majestic acoustic marvel of India built by Mohammed Adil Shah falls in sync with his statement. It is believed that whatever you speak in the whispering gallery here echoes around 11 times as if making you affirmed about your thoughts. This massive monument is the second largest tomb in the world and uniquely the massive central part is not supported by any pillar. One of the guides told me that it is built with seven stories imbibing the concept of seven heavens in Islam. This is the reason when you speak on the seventh floor (aka whispering gallery) of this monument it is like speaking in the seventh heaven.

The sound is so engineered in this acoustic marvel of India that standing in the gallery you can hear even the minutest sound made by the person standing on the other end 34 meters apart. This includes the sound of even a ruffle of cloth to the sound of a deep breath.

In today’s aeon when it’s hard to listen to the rhythm of life, find what your soul echo’s in Gol Gumbuz – Acoustic marvel of India – Image Source

Are you wondering if this is a tomb then why such spectacular acoustic effects are given to it? Just to add one more name to the list of splendid acoustic marvels of India? You got it right, yes it is a mausoleum where the body of Sultan Adil Shah, two of his wives, his love and his grandson reside. But before that, the King used this monument for secretly meeting his love, Rambha. The acoustic effects recouped the distance and when his love spoke from the other end he could feel her every word along with the movement she made. One more peculiar feature is that when he had the conversation on the seventh floor nobody standing below could hear what the love gala was going on while they both could hear what was going on the lower levels. How clever of him? I feel love augments that additional slice of ingeniousness. Apart from this, he also held conferences of ministers of other state and surreptitiously heard their discussions.

The threads are loose, the pages are pale but the history and magic they carry are still alive. I hope these acoustic marvels of India are tendered with precaution because the secret they behold is yet to be deciphered.