Chacha Chaudhari, Champak, Tenali Raman, Chandamama or the Amar Chitra Katha series, these comics were the most precious possessions of our childhood. Even today when I catch any of these I do enjoy reading them, though, the passion has changed to some degrees. But do you know, long before these comics came into the picture, India had various other forms which told the invigorating tales? Kawad Vachan is one of that. Coming from the lanes of Rajasthan, Kawad, is somewhat like an almirah which has several doors and opens up in unique sequence. This Kawad used to tell the fables of Ramayana, Mahabharata and local inspirational folklores. In present time too, when you visit Jodhpur you may find a Kawad for yourself. I wonder how interesting would have been to see the Kawad Vachan of the legendary story of love which resounds in the alleys of Mandu, an ancient city in Madhya Pradesh. So what happened once upon a time in Mandu that even after centuries accolades of love are unforgotten. 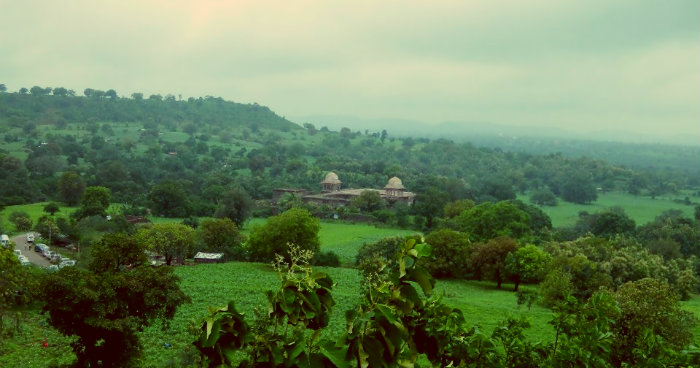 Amidst the heart of incredible India, Madhya Pradesh muffles the tales of Mandu Image Source

Just 100 kilometres from Indore in Malwa region lies the ancient city Mandavgarh, i.e., Mandu. As per the Sanskrit inscription found in Dhar City, Mandu dates back to 6th century. Like many influential cities in history, Mandu too saw the dusks and dawns along with many kingdoms. You must be wondering why Mandu was prominent? Sitting atop 633 meters of elevation in Vindhya Range, gazing Malwa from north and Narmada River Valley on the south, can be the strategic position for any ruler as apart from the natural defences one can still be in the centre of India.

In 10 and 11th-century Parmars ruled over it and then after changing hands few times it came under the rule of Baaz Bahadur, though, he too could not hold it long but in his reign, the city became the epitome of love.

When you enter the city of Mandu, it is not only the ancient architectures which leave you agog but the silence which still hold the scores of the bygone era. One of the most well-known palaces of Mandu is the Jahaz Mahal, you ought to fell in love with the creativity of its builders. If you happen to reach the place around noon you would see the silhouette of the Mahal resembling a ship which is anchored to a small piece of land between two lakes. Gee! But do you know people say that Ghiyas-ud-din-Khilji built this striking structure to accommodate some 15,000 women of his harem? Ugh! The spoilt rulers of past! Just near Jahaz Mahal is another famous architecture, named Hindola Mahal. No! It doesn’t give you any swaying effect. It is named so as its outer walls are made with sloping effect. 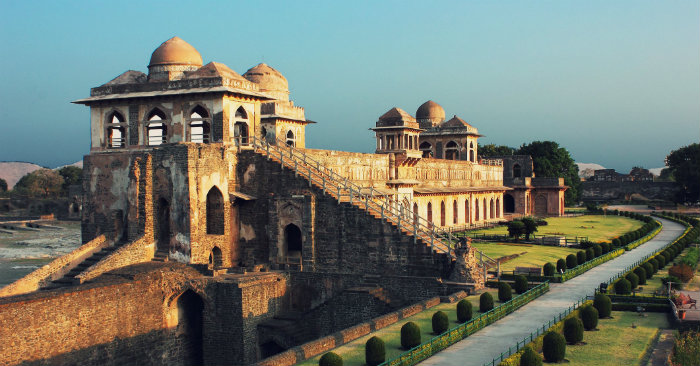 Reaching the face of Mandu, Rani Roopmati pavilion, I could not stop myself wondering that did River Narmada which looked like a meagre line from atop, seemed different some 500 years ago? Another stimulating thing about the place is that people believe, if you come in the rainy season you may sense the presence of Rani Roopmati singing the melody of flurry. I know this sounds a bit eerie as I have yet not told you what happened once upon a time in Mandu. Let’s keep the best for the last! Moving further when you reach Rewa Kund this again whispers the fable of love. There is a hearsay that Rewa Kund contains the water of river Narmada and I think that justifies its name which is the other name of the river. And the locals even say that Baaz Bahadur had built this small pond for his beloved, Roopmati.

If walls could speak, this pavilion would have resounded with notes of devotion and love     Image Source

The ballad of the poetess and the prince

The tale starts with Baaz Bahadur losing his heart listening to the vagabond notes of ravishing Roopmati on the bank of River Narmada. The musical alchemy between them and the erotism of Rani Roopmati’s good looks kindled the love for which Baaz Bahadur had forgotten everything. But still, Roopmati, the simple girl of Dharampuri, declined to unite with Baaz Bahadur, the prince of Malwa. Shocking?

Rani Roopmati revered Narmada River and she did not eat any meal without seeing the Goddess. Going to Mandu Fort would mean separating from the deity, for which she was not ready. Thus, Baaz Bahadur decided to turn the track of Narmada River and built a pavilion from where she could see the river. But soon after they cohered together, Adam Khan attacked Mandu on orders of Akbar. While fighting in the war, Baaz Bahadur was defeated so he fled to save his life but Rani Roopmati became the captive of Adam Khan. The folklore of her beauty had travelled far and it is even said that apart from spreading the kingdom, possessing Roopmati was also a cliche. But who can hold water in his fist, Rani Roopmati died eating the crushed diamonds.

The journey of Mandu is amazing when described in words. Just imagine what would be the trance when you visit the place. Once upon a time in Mandu…… I think filling these blanks with your own experiences would be a new story to share.