21196 kilometres. Can you guess it? Nope, that is not the journey I travelled till date. (Hope I do it soon!) It is the size of the great wall of China. Yes, the one we studied in GK. It is such a mighty wall that it was even believed to be seen from the moon, though that thought has been debunked. But this cannot stop the tales to augment like the one which says that one of the ingredients used in building this wall was sticky rice. Strange? Yet, I cannot say whether it’s true or not. I consider fables are like the flowing liquid, they take the shape of the believer’s thoughts. Moving on these quirky notes lets hop on to a destination which we may not have studied in our textbook but it comprises of the second longest wall of the world, Kumbhalgarh fort, the underrated marvel of India. 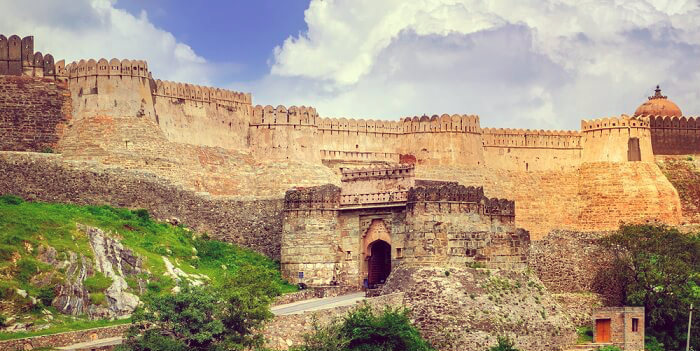 As soon as you see the mighty walls of Kumbhalgarh fort touching the clouds, you would know why I called it, the Underrated marvel of India. Image Source

The 36 kilometres long wall appearing like the row of surahis (earthen pot with a long neck), skirting the fringes of Kumbhalgarh fort, is a sight of mesmerism. Akin to the sea beholding the reflection of the sky, the great wall of India reflects the essence of incredible India. While I talked about Udaipur, did I tell you that the founder of Udaipur, Rana Udai Singh II was refuged in this fort for two years? With Udaipur just 82 kilometres away from Kumbhalgarh, I think maybe this was the place where the first thoughts of the city of lakes emerged? (Wild manifestation!) And why not, when you yourself are crowned in some engineering miracle you ought to come up with something heavenly.

The awes of Kumbhalgarh Fort

Just imagine, crossing 13 hills, valleys and jungles, the 15 feet wide wall of Kumbhalgarh fort may look like a gaudy defence system but to awe you, the fort was difficult to find even after that in the ancient era. As per folklore, in 1578 when Akbar’s general Shahbaz Khan came to attack Kumbhalgarh fort, he just wandered for 3 months in mountains and jungle but couldn’t track down the location of the fort. Isn’t it unbelievable and amazing? Though the internet has some different story too. And now I am struck whether to believe the people whom I met or the technological interface?? You decide.

Peek-a-boo into the history

Talking so much and not letting you know who brought this masterpiece into reality would be such a crime. Would you believe that this fort has its roots from 6th Century? The grandson of King Ashoka, King Samprati was awed by the Aravalli ranges and thought to crown it by building a fort there. The Maurya Empire named the place as Macchendragarh and bequeathed some royal buildings and even built some 300 Jain temples around it. But after that, the place lost its admirers and it reduced only as a military camp. 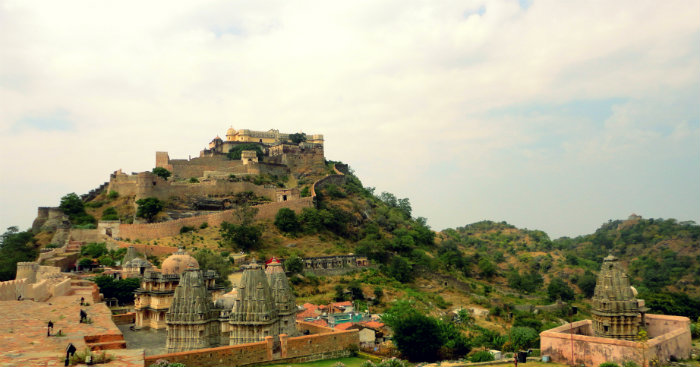 Then it was Rana Kumbha who took the ruins of the Sisodia Empire on to a new level. He commissioned the construction of the fort in 1443 and the fort got completed in 1468. Don’t you think the wall of Kumbhalgarh fort must have been like a wonder that time? I know it still is but ages back building 1100 m above sea level must be a tough task. It is said that three horses could simultaneously run on this wall. This gives me a kind of adrenaline rush. I should have taken a horse ride over this 36-kilometre paradise! Though this is quite risky. There are many parts of the wall which have not been visited for over 100 years. Why? Because it is taken over by jungle and crumbled by time. Do you dare to have a walk over the entire Kumbhalgarh wall?

But the construction wasn’t easy!

For the King who had men and resources to complete the fort, everything may seem like the bed of roses. But it was not. Maybe if you can visualize as my minds trick me into you may have goosebumps after knowing the legend. It is said that when Rana Kumbha started with the construction of the fort, every night the newly-erected structure would break off. This made the King very anxious, then, one sage named Bhairav came for his help. He suggested that the site is cursed and it would require a human sacrifice to commence any construction. Wait, don’t be fast with your judgements, there was one more clause added to this advice.

The human sacrifice was required to be by free will. What you are thinking is right, no one was ready to accept the invitation to Yamlok. Then again, the sage came to rescue and offered himself for the sacrifice. As per the hearsay, the sage said that he would start to walk over the mountains and wherever he stops his head should be slashed off the body. The sage walked for 36 Km and stopped, his head was slit and as per his advice the main entrance was built where his head fall and a temple was built where his body fell. You can find the name of the sage on the Hanuman pole the main entrance.

Running 36 kilometres on Aravali Ranges, The great wall of India leaves its spectators in awe with its grandeur Image Source

Beyond the Kumbhalgarh fort wall

Sitting atop the Aravalli range, this Mewar fortress in Rajsmand district of Rajasthan, beholds some breathtaking views and palaces to besot you completely. While the track is laced with beautiful gardens, please don’t get upset with the lack of signboards. We Indians believe in self-discovery! After visiting the Badal Mahal and Rana Kumbha mahal all you would have in your mind would be accolades for the King. And just to amaze you this fort has 364 temples in it. One of which has Akhand deep ablaze that is said to be burning from 700 plus years. I wonder, is that even possible?

In the end, I would just add, history is amazing and to see the footprints of its journey, you would have to make a journey.