Varanasi, a fiesta of culture, spiritual and gastronomical diversities is an experience for which life is also not enough. It is an awesomely full spectrum of life enchanting you in such a way that you always desire to come back. The blood-red sun rising from the laps of holy river Ganga is knack at putting a spell of its beauty when you decide to sail in a boat in the early morning. While as the day falls and the offspring decides to return to the mother, the ghats turn into the city of lights and the aura is incensed with the resounding melody of the conch shells and rhythm of bells. But this is not all, the oldest city in the world, Kashi, beholds a ghat which is the mystical centre for attaining salvation. Manikarnika Ghat, one of the 87 ghats of Varanasi is a riverfront where death is deified. 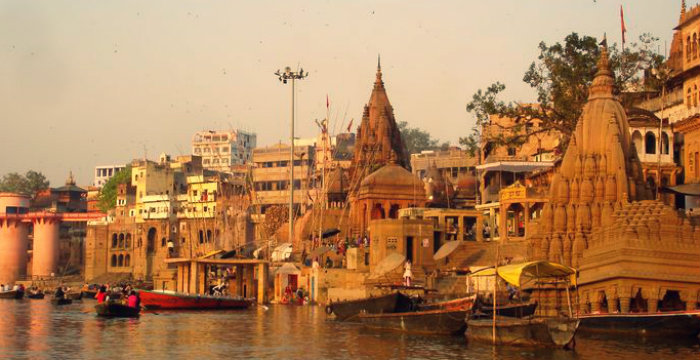 Manikarnika Ghat, A river-front where the death rules Image Source

When Life Meets the Truth of its Existence

Sailing from Dashashwamedh Ghat when you head towards Scindia Ghat while you are lost in the calm melody which the oars create and fall in love with the mighty river and the silver waves which rhythmically hit your boat. Or when you are bequeathed with picturesque stretch of temples in myriad of shades, tints and hues with wind swinging around you as a staunch companion, just then all your attention is taken away by the ghastly pyres ablaze and though the echo of distant chants of the last ride of the materialistic body hit your ears, death-like silence take over your soul.

I could not stop myself to ask my mariner about the ghat, to which he exclaimed, “Manikarnika Ghat, the mystical centre where death is deified”

Destination which is not for faint-hearted – Manikarnika Ghat Image source

“Asatoma sat gamaya, Tamasoma Jyotir gamaya, Mruthyoma amrutham gamaya” This shlok from Brihad-Aranyaka Upanishad states the truth of life and request the supreme to take him from falsehood towards the truth, from darkness guide me to light, from death impart me eternal life(Moksha). Manikarnika Ghat is one such gateway through which one can break the vicious circle and achieve moksha.

Amid the ruckus of small lanes which makes Varanasi, Galiyon Ka Shaher, from the Ghasitola road as you enter the mystical centre, the Manikarnika Ghat, it is the world within the world where the funeral pyres have never cooled off since ages. I was not alone who had come over the Ghat to witness the rituals which gives a soul an eternal life, the salvation. But this certainly is not for you if you are a faint-hearted person as the truth of life is sometimes hard to see. Like a railway station, different bodies come in quick succession to leave for their final destination, nirvana. You would not believe just to be cremated in Manikarnika Ghat some people who come from different places all around the globe stay in Kashi Mumukshu Bhawan. It is one of its kind, hundred-year-old lodge and is believed that those who lodge here attain salvation too soon. Amazing India and Amazing beliefs! 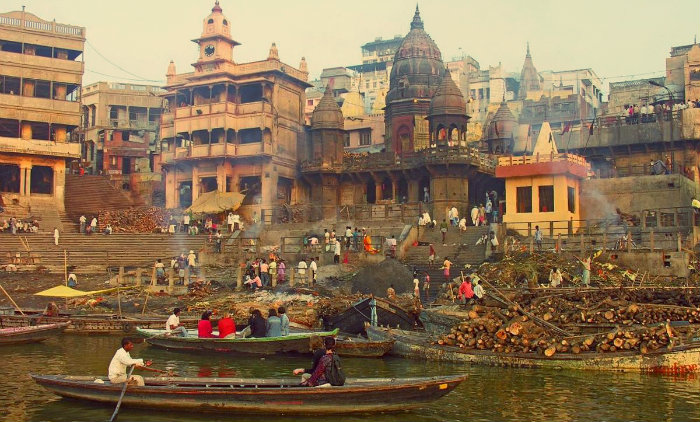 The great fables of Manikarnika Ghat

“Ekam Sat, Viprah Bahudha Vadanti” Rig Veda states that there is only one truth but it is men who describe it in different ways. Akin to this, the mystical centre, Manikarnika Ghat has many mythical stories crisscrossed in the tapestry of various believes though there is one truth which is unknown to humans. One of the legends is jinxed with Goddess Sati’s self-immolation and it says to calm Shiva’s rage when the diety’s corpse was cut by Lord Vishnu’s Sudarshan Chakra which eventually dropped in different parts of the Indian subcontinent, her earring fell on Manikarnika Ghat.

According to the Dom Raja, Lord Vishnu dug a pond near the ghat for Lord Shiva and his consort Goddess Parvati. While taking bath the Goddess lost her earring and then Lord Shiva told the Brahmins of the ghat to search it. They found it but kept it to themselves, angry Lord Shiva cursed them to be untouchables forever and when they pleaded for forgiveness they were given the sacred fire which every human would require to attain salvation. These Brahmins are the Dom caste and they are the ones who add the first five logs to the pyre and then hand over the fire from the sacred kund to ablaze the pyre.

Mark Twain may have said about Lord Shiva’s Kashi, as a city older than tradition, older even than legend, and looks twice as old as all of them put together, but, when you visit Varanasi, the city knows which nerve to tweak every time to give you an experience never felt before. While the Ganga Aarti transfixes you within its divine effusions, the 87 ghats enrapture you with their tales and the alleys remain an esoteric maze in which you always want to be lost. The history rewinds before your eyes with a temple built and destroyed several times, Kashi Vishwanath Temple, one of the Jyotirlingas. And amidst the mystic serenity imparted by various temples adorning the city, the very famous Banarasi chai, Banarasi Paan, Thandai, Rabri Lassi and other culinary pleasures fail all your dietary plans and turn you into a gourmet. But wait, if you go to Varanasi without adding Banarasi Saree in your buying list then be ready for an impetuous unloading of your wallet.

As they say, “Kadam toh Rakho Kashi main, Tar jaoge Kashi mai”, so whether you live in any part of the globe, visit Varanasi at least once in your lifetime. It may not be a destination with beautiful emerald mountains adorning the landscapes but the ghats, the temples, the food and the shopping will leave you beguiled forever. At the end I would say that the glees of Varanasi are unending, you just need to put one step forth.