India is a land of natural beauty and man has made it possible by its state of the art engineering which has provided not only a competent rail route but Indian railway has also give an opportunity to the traveler to experience and allure the natural beauty.

Indian railway is one of the best means to explore India and most of us have grown up enjoying rail journey. It’s not only the cheapest mode to travel across length and breadth of the country but it is one of the adventurous journey to experience. Most of the travelers prefer traveling by railway not just because it is less expensive but they witness beautiful scenic landscape, spooky tunnels & varieties of water bodies while traveling by railways.

The Snow Sojourn (Qazigund – Srinagar – Baramulla) Jammu Udhampur Srinagar Baramulla Railway Link is one of the most awaited railway project with 1/3 of the construction completed & is expected to completed by 2020. This project is one of the state of art project of recent times. The route passes through the vast vegetation of Chinar trees, beautiful green valley and snow-capped mountain peaks. Winters is probably the best time when it will be on its fullest charm. It would be one of the amazing experience to pass through the valley covered with show.

It is one of the toughest terrain of India for such project. With the completion of this project travel & tourism in Jammu & Kashmir is expected to rise 4 times. 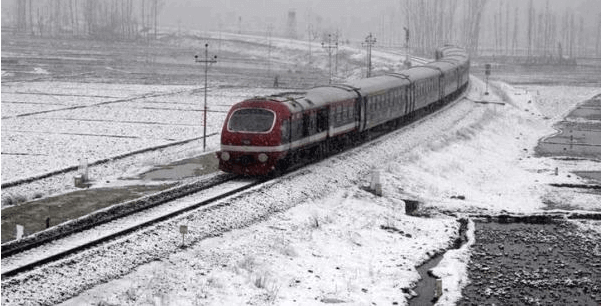 One of the most the best scenic rail route of India. An engineering marvel – Image Source

Mandapam – Pamban – Rameswaram Rail Route – The Pamban Rail Bridge is India’s first bridge which is built across the sea connecting the island of Rameswaram to Mandapam. Not only does it depict an engineering marvel but also is one of the most dangerous bridges which at the same time provide marvelous scenes of the crystal blue water of the seas enveloped with lust green beaches on both sides. It is the second longest sea links stretching at 2kms with 143 piers. 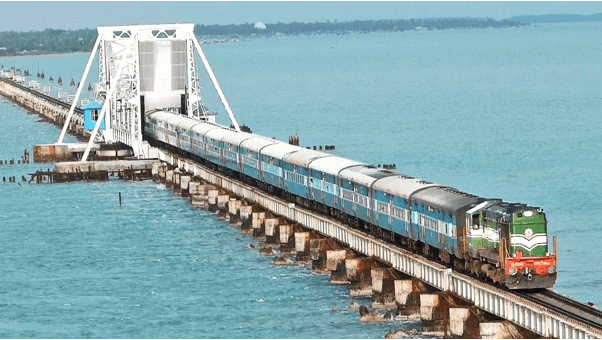 Dudhsagar Rail Bridge – Dudhsagar Rail Bridge would make you spell bound as it provides the most magnificent views of the Dudhsagar waterfall from the rail bridge. You would be amazed to hear the deafening sound of the waterfall as you pass through the bridge on an eerie night The railways track is bestowed along the scenic track most appropriate for a hike or a gentle stroll till the Dudhsagar waterfall which is roughly 8 kms in distance where you could enjoy the majestic Dudhsagar view point. 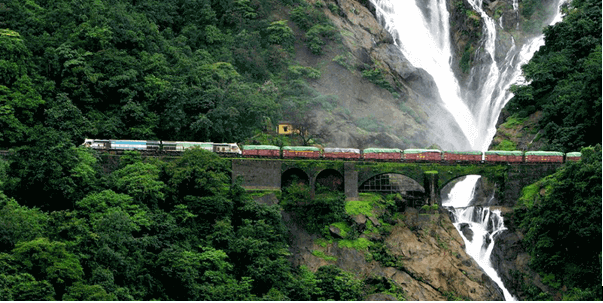 Kalka Shimla Rail Route – If you are not in hurry and seriously want to experience the scenic views of lush green valley spread across Kalka – Shimla then the best way to travel is to take the toy train ride from Kalka to Shimla which paved its way in the year 1903. The rail route is very nicely designed which passes through 102 tunnels and 83 bridges thus providing it the much needed character. You would be truly mesmerize by the smell of oak trees and rhododendron forests. This route will take you to the fairy-tale land which you would have wanted to visit during your childhood.

Darjeeling Himalayan Railway – The eastern states of India also has an awe-inspiring rail route which runs from Jalpaiguri to Darjeeling. You would be amazed to see the beautiful landscapes, greenery and the delightful climate .The views of the tea plantation for the train’s window and the aroma of the best tea would intoxicate you. The rail route would provide you everything right from the view of the vast and expansive tea gardens to the mighty Kanchenjunga. What makes this train apart from others is that it runs on a meter gauge.

Nilgiri Mountain Railway – Nilgiri Mountain Railways takes you to the southern famous hill station Udhagamandalam also known as Ooty from Mettupalayam. The rail route was started by a Swiss inventor, Riggen back who paved the first line up till Coonoor. Travelers can enjoy the views of the river Bhavani, while the train passes through it towards the plains and then to the Nilgiris. The majestic views of Coonoor, Wellington, Lovedale are totally breath-taking as the train passes by which finally reaches Ooty crossing 250 bridges and 16 tunnels.

Remember, “taking a journey is more fun than arriving at destination”. All the above rail routes are a perfect amalgamation of man-made marvels with God gift of nature. By taking this rail routes, it would not only help traveler to reach their final destination but it would also provide them with an ultimate experience to be remembered for a lifetime.